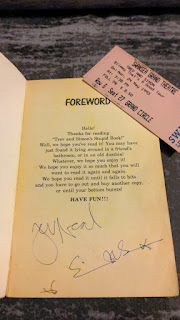 The Xennial Dome - The podcast of interest to anyone born between 1977 and 1985 is back for a Christmas special (or a Xennial Xmas Xpecial as I insist on calling it).

Esyllt and I decided to break the format for Christmas and speak to some people who aren't Xennials but certainly understand them better than most - Stars of 1990s kids television, Trevor and Simon.

Needless to say, I was (and still am) a huge fan of the pair of them - as my signed and battered copy of the Trevor And Simon Stupid Book will attest. The episode is available now in the playlist below as well as wherever you get your podcasts. And don't forget, you can get in touch with the show on Twitter, Instagram and MySpace.

O'r Diwedd 2021 - The sketch show which looks back at the year returns for 2021. Technically, we've got two years to cover, having been put on furlough for 2020, but 2021 has given us more than enough to deal with. The show will be broadcast on New Years Eve at 9pm and will then be available on S4C Clic/BBC iPlayer afterwards (and all with English subtitles if you need them. I do and I'm in it).

Harry Secombe: Unsung Comedian - Also on New Years Eve, BBC Radio Wales are repeating my documentary, first broadcast in September, to mark the 100th anniversary of the birth of Sir Harry Secombe. Ignoring his not-insignificant singing career, this concentrates solely on his comedic legacy. You can catch it on-air at 6.30pm on the 31st December or on BBC Sounds afterwards.
at December 22, 2021 No comments: